During Cheeseburger Week from January 6 to January 11, 2019, Pasadena honors Lionel Sternberger's genius in being the first to put cheese to hamburger and serve it at the Rite Spot in Pasadena in 1924. Forty of Pasadena's favorite restaurants, lounges and burger joints offer their signature burgers, some special creations and great deals during Pasadena Cheeseburger Week.

Some, such as Dog Haus,  El Portal and Del Frisco’s Grille offer specially created burgers for Cheeseburger Week. Some surprising entries last year come from True Food Kitchen and look for something special from first time participants 1919 Café at The Huntington Library, Trejo's Cantina, Roscoe's Chicken and Waffles and more.

Check out all the participants and see what everyone had on the menu for Cheeseburger Week at www.pasadenarestaurantweek.com/restaurants. (List is updated as information becomes available.)

Again in 2019, patrons can vote for your favorites in the Cheeseburger Challenge. Who makes

For 2017, we will be adding several restaurants, including True Food Kitchen. Some participants will include special menu items or deals for patrons during Cheeseburger Week. 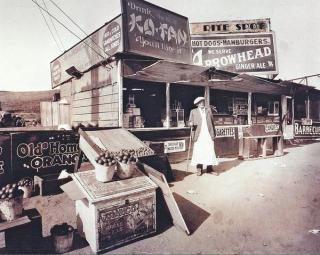 Times, Time magazine, cheese-burger.net, Hamburger Heaven: the Illustrated History of the Hamburger and The San Gabriel Valley Tribune. Even CNN is carried the story of sixteen year-old Lionel Sternberger burning a hamburger on the grill and covering his mistake with cheese rather than throw the burger away. The customer was delighted and a new culinary treat was added to the menu, the Aristocratic Burger: A Hamburger with Cheese sold for fifteen cents at The Rite Spot in Pasadena.

The Pasadena Chamber of Commerce hosts the sixth Cheeseburger Week and Cheeseburger Challenge January 8th to 13th as a Pasadena Restaurant Week event. Once again, people will be able to vote for their favorites in a number of categories, from traditional lunch counter burgers to white table cloth and veggie and vegan cheeseburgers. There will also be an alternative cheeseburger category or two.

Under current health regulations, local restaurants have been allowed to reopen for indoor dining with 25% capacity.

Here are local restaurants to check for availability. (Always call ahead and make reservations as space is very limited.